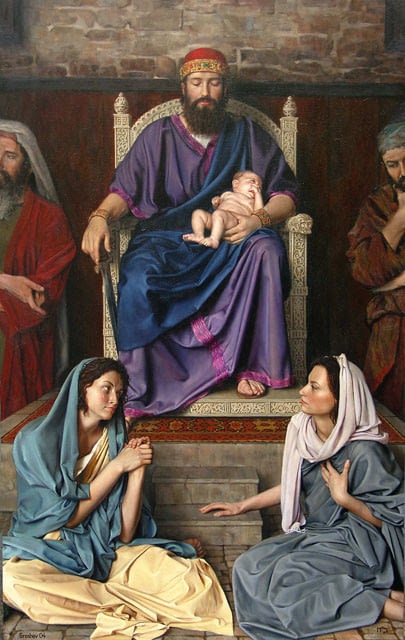 This person has been led to give a gift from the scriptures for you today.

Many of us look at Solomon as a very wise man, one of the wisest in the world. Wisdom he did indeed have, yet many of us mistake this trait for one who was smart, intelligent, contains a body of knowledge, principled, and able to see things beyond their normal meaning. The wisdom that made him great is not the way we have been led to believe.

When he was young, the Father appeared to him in a dream and asked him, “Ask and I will give thee.” He replies that David (his earthly father) walked before the Father’s ways in truth and righteousness. This is a reference to the Torah, or the instructions. Solomon then says, “I know not to go out or come in.” He realizes he does not know the direction as David did. So he asks, “Give thy servant an understanding heart to judge your people, that I may be able to discern between good and evil. “

Solomon, at his birth, was given a spiritual name by Nathan the prophet. This name is Jedidiah. Jedidiah (or Yedidyah, Yedi-YAH) means beloved of YAH. This has a deeper meaning, as the love which is spoken here is of a true knowing, a covenant relationship between two people. This is where we get the word Jedi. Many people think the Jedi word came from a Japanese play, or an ancient Egyptian magician, yet its origin is much earlier than this. These cultures were aware of this word because all languages came from a mother toungue. This person has been lead to believe that this language is the original proto-Hebrew, prior to the Babel tower incident. You will see Yedi/Yedah word reference throughout scripture as a covenant term, similar to a marriage contract or a blood oath (ketubah). It is a knowing so sacred that it is as if two distinct things become as one wholesome thing.

One of the first references in scripture to this word comes in Genesis 3. There are three distinct references in this chapter, which helps defines the word, the number, and the third letter of the Hebrew alphabet. The first one is in Genesis 3:5, in which the Serpent says, “For the Creator knows that when you eat from [the forbidden tree] your eyes shall be opened, and you will be as Him, knowing good and evil.” Notice a clear distinction between this and Solomon’s request to the Father, in which he asks to discern between good and evil. In other words, there is a separation, not a conglomerate. Also note the word is used twice, introducing dualism. We will get to that at a later time. The second reference is in Genesis 3:7. “Then the eyes of both of them (Adam and Eve) were opened, and they knew they were naked; so they sewed fig leaves together and made coverings for themselves.” There are many things we can discuss here, such as the Laodicean reference and the covering, yet we will move on. The third reference is Genesis 3:22. “Then Yah the Creator said, Behold, the man (a reference to both Adam and Eve, as both came from one flesh) is become as one of us (the aspects of the Creator), to know good and evil.” This is when the Father takes them out of the garden and places Cherubims with the flaming sword (we will speak about this reference at a later time). There are many things that can be said here yet we will move on.

The word also has relative meaning, which is to appoint. The Yedi reference was a name given to a specific Israelite as those in the book of Judges. This is another reason why Nathan was lead to give Solomon this name.

Let’s go back to Solomon’s dream. Notice he did not ask for wisdom in the traditional sense that we have been taught, yet the ability to understand justice, to know between good and evil. In other words, to separate, as was mentioned earlier. This ability is clearly demonstrated immediately after this dream, in which Solomon judges a case in which two women claimed to be the mother of the child. He tests both women by declaring that the baby is to be separated in two, so that each woman can receive half. One says nothing, while the other cries for the baby to be spared, to give the baby to the other women. Because of this, the revealing of the true mother is given.

In Revelation, it speaks of two similar women, which is a clear reference to this judgement. One is of the pure woman in white who escapes the beast, while the other is the harlot woman, who rides the beast who drinks the cup of judgement. Both claim to give birth to the Messiah… yet as judgement is given, the pure woman is shown to be the true mother, which reveals the lie of the harlot. You can also see this in Proverbs, which speak of the similar women; the purity of wisdom and the foolishness of the prostitute.

The answer that Solomon gives in his dream pleases the Father. The Father says, “because you have asked for this, and has not asked for long life, riches, or conquering your enemies, but the discerning of judgement; behold, I have done according to your words, a wise and understanding heart, as well as that which you have not asked, riches and honor.” Let us now notice the statement the Father makes afterwards concerning his life. “And if you walk in my ways, to keep my statutes and my commandments (a reference to the Torah, the instructions), as your father David walked, then I will lengthen your days.” The Father makes it clear that His guidance will bring life, and that to not follow them brings death.

The wisdom which Solomon asked was to perform righteous judgement. Read 1 Kings 3 in full and it will clearly show this within the two stories. One in which he is given wisdom, the other in which he performs this wisdom. This is the same performance that we must ask; to not only allow the Father to separate the good from the evil within us, yet to allow Him to perform this righteous judgement in front of witnesses. This is what the true seeker of knowledge should strive towards.

Now some of you will say we are not to judge, which was not the teaching of Yahshua (Jesus). He said we are not to judge when not following the standards we are to be judged. First remove the plank before you remove the speck. The real enemy here is hypocrisy. Will share a writing later about this. It baffles me when this person sees Christians and Jews speaking to people that we should be non-judgmental, when we have a book in the scriptures called Judges, and that in Revelation the Messiah will come down with great judgement on this world. This is because we err, not knowing the scriptures, as Yahshua said in Matthew and Mark. We have twisted the word. This twisting is referred to as wickedness, or the twisting of the wick.

Some who say they believe in the Bible have also said it is impossible to live without sin, in order that they may keep performing in their sinful actions. For this, a question is asked: If you are forgiven of your sins, are you living in sin? It is lies like this one that we have inherited.

This teaching is to make it clear what it means to be a guardian of peace and justice, which Jedidiah was until he began to fall from the instructions of the Father. It also clearly references the true meaning of the Yedi/Yedah (Jedi/Yoda) reference. Some people might say this is just an opinion. For them it is said this: to read the script diligently and see it for yourself. Although they may not want to see it, it is there. We do not have to go to a church to see this. What we must do is go to our Father. He will speak to us in dreams and visions.

Blessed be those that hear the words of this message. Thank you.