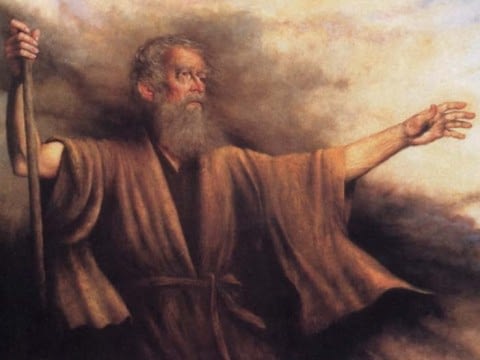 We will now continue this message to further explore connections between the Jedi and the shepherds of ancient times, specifically those spoken about in scripture. In the previous portion, we went over the primarily tool of the ancient shepherds – that being the staff, or rod. For this portion, we will go over an important visual aspect of the shepherd, specifically what has become known as the cloak, or mantle.

Mantles in scripture represent a spiritual covering of authority – a garment which symbolically harnesses a calling of responsibility. This piece of clothing can be passed on from one generation to another, similar to the staff/rod. It also represents the right to judge or make decisions. The prophet Elisha, for instance, was able to perform similar feats as Elijah did when presented with Elijah’s mantle. Another example is when King Saul laid hold upon the mantle of the prophet Samuel, in which the garment was torn from his grasp. This represented the kingdom of Israel parting from his rule.

Today, it is not uncommon to see monarchs, clergy, judges, and doctors wearing similar type coverings. As far as their specific colors and what they represent, this is explained further in the original video series.

Regarding the brown and beige colors – this is a specific type of authority which was known as being trustworthy, humble, and dependable. It is a conserved, common-sense type anointing which practiced a form of abstained servitude, or what many viewed as hermit-type practices. They were to speak truth regardless of worldly criticism. You see this role within many prophets in scripture.

As explained in the earlier portion of this message, the prototypical visage of the Jedi is first depicted within the character of Obi-Wan Kenobi, otherwise known as Old Ben. The word “Ben” is a Hebrew reference meaning “Son of” and is directly connected to spiritual linage. Ezekiel, for instance, is referred to by the Father as “Son of Man” or “Ben Adam,” the son of the original seed. This reference is further expanded upon in Daniel’s vision and Yahshua himself.

In Exodus 20, the Father declares that the iniquity of the fathers will fall upon the children unto the third and forth generation of those who hate him. Note how this time period is clearly depicted in the Star Wars movies, initiated by the Jedi purge and the fall of Anakin Skywalker. It is no coincidence that a curse falls upon Skywalker’s children for quite a few generations within the trilogies; this is an ancient principle which has been ingrained for thousands of years.

It is also not coincidental that these words came from a deliverer known as Moses. In fact, the mannerisms of Obi-Wan are quite similar to the depiction of Moses in scripture. Moses, for example, is exiled and lives as a hermit learning the shepherd’s trade. This exile also happens with Obi-Wan Kenobi, who shepherds the young Luke Skywalker. Just as Obi-Wan helps mold the direction of Luke Skywalker, Moses does the same with Joshua (or Yahshua “Yah saves,” a deliverer). Both Moses and Obi-Wan have a strong association with the desert.

Yoda, on the other hand, is essentially Obi-Wan in another form. You might have noticed that he and Obi-Wan wear essentially the same clothes – yet look closer to note that Yoda holds an actual staff/rod instead of the lightsaber. His age of 900 years old is a direct reference to the early fathers in scripture, such as Adam, Noah, and Methuselah. Yoda’s name (Yodea/Yada/Yeda in Hebrew) has a similar meaning to the word Jedi, which means “to know” or “to be wise.”

Trees are connected with both the biblical patriarchs and Yoda, as it depicts an early ancestral wisdom. Also note the burning bush in which Yah is revealed to Moses, as well as the two trees in the Garden of Eden. It is not hard to think of particular Star Wars scenes which Yoda reveals the Jedi path in a similar manner.

There is much more than can be said on this topic. For now, we will stop here and will again continue in Part 3. In the next portion, we will be speaking more about the shepherd’s role and how this has been lost in translation. Thanks for reading.