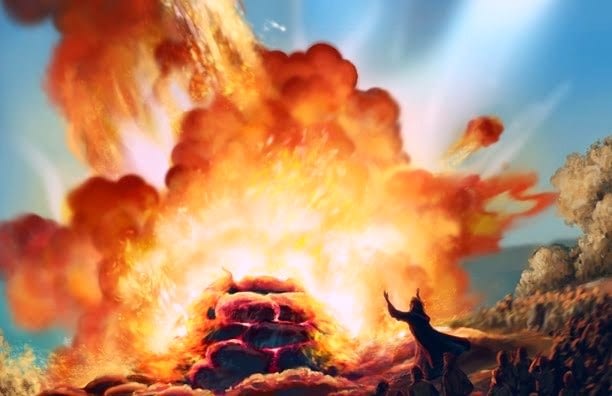 Been sensing in the spirit that there is a showdown coming.

In the book of Kings, there is a story in which Elijah challenges the 450 prophets of Baal and 400 prophets of the groves, to meet with him on Mount Carmel in order to show to the people of Israel who is the true Elohim.

The chapter can be a bit hard to follow as the word “lord” is interpreted in three different instances. Although, in the original Hebrew, they are all different words. The word is first given to the name of Yah, LORD, which translators gave to hide the ancient name. The second time is when Obadiah is speaking to Elijah, in which “lord” is referenced as a polite greeting to one that has authority. The third time it is referenced is actually with the name Baal itself, a false worship which in Hebrew can be interpreted as “Lord,” yet also “Husband,” “Master,” “or “Possessor.”

Some might be aware that in the mid-1990’s there was an early site called the Jedi Academy. This site was heavily influenced by an individual named Baal Legato. Baal can be interpreted as Master, or Master Legato. As it was then, there are many online individuals in the Jedi Community who will use the term Master in their name. Usually the word is given in reference of title that is earned, similar to Rabbi as in Yahshua’s time.

When reading the scriptures, the Baal title starts to hit home. What was it that made Baal worship so dangerous to the people of Israel, and how did it separate itself from the I AM? The answer is in its practice.

On Mount Carmel, Elijah challenges these four hundred and fifty Masters (if you will) and says to the people, “How long will you be between two opinions?” The word opinion in the Hebrew means divided. As many of you know, the belief in the Force is literally of two opinions; it is divided as a Light side and a Dark side, and, in doing so, are part of the same energy or spirit. Some may also remember a mantra which goes: “Two sides, one Force.”

Many people believe that Baal worship reflected on only one god. The worship was actually towards many gods. “Call on the name of your gods,” says Elijah, “and I will call on the name of Yah.” The belief in the Force has grown to the belief of many gods, from various religions, especially those from the East as well as new age Gnosticism. In fact, Force believers take from all religions. In the scriptures, there is a particular word that is used to describe this act. That word is amalgamation. It could be safe to say that by taking from these religions, they have taken the spirits of their gods in order to combine a powerful spirit. Does this spirit give the Jedi today their power?

“The one that answers by fire, let him be Elohim.”

Fire in the scriptures is directly related to the spirit of Yah, or the word of Yah. In Deuteronomy it says that Yah is a consuming, holy fire. Yet there is also what is known as strange fire, or strange gods. These are other forms of worship which infiltrate the true worship.

Mount Carmel is about an answer. It’s an answer of fire. Which fire will burn up the sacrifice? Which tongue will ignite in the showdown?

Are hearts to be turned back again?