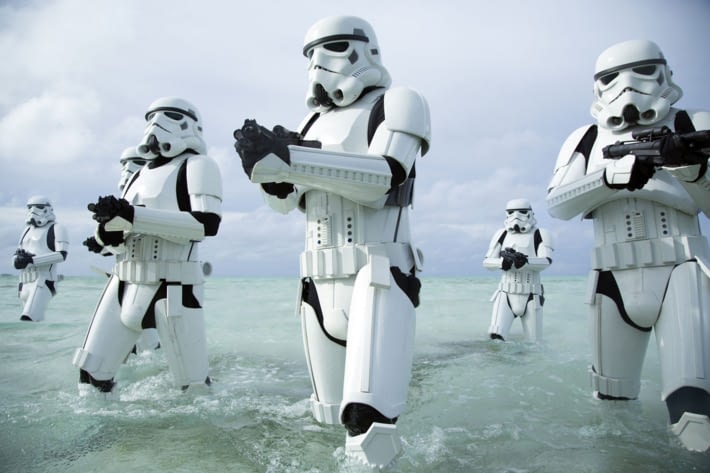 A vast band of troopers have infiltrated the camps.

Deployed for swift response, they come in various forms, such as the Scout Trooper, Death Trooper, and the Shock Trooper…. each deployed with a particular tactic. Although specialized, they serve together as a galactic garrison. It is through intimidation they enforce the will of another order.

They are similar in appearance, rather large in number… yet their overall aim is weak. Their blasters, clumsy and randomized, fail to consistently hit the elegant targets. Although their helmets cover their visage, they are necessary to keep communication with the integrated comlink. Their armor is a molded, hard material. Under the armor… a black glove covers the innermost part of their being.

They march onward in a drone like state, living within a facade of armored suits. They appear faceless. They walk in legions, annihilating all within their path.

They can trace their blood from the prototype of a mercenary hunter. In fact, it is rumored that they stem from a Jedi with noble intentions, although their contract was eventually stolen by Darth Lords. They originate from cloners, and, in early drafts, were to wield lightsabers. Today, they train under imperial academies, bred from birth to fight all resistance without hesitation.

We are not to underestimate these soldiers… for their main objective is to not only build an imperial legion, yet a political religious system which fully takes over the known regions. For their leader is a great adversary.

Spiritually, these Stormtroopers stand among us today. Their tongue is as a sporadic, fickle blaster as they do not possess the flame. We outwardly see their mask of forced persuasion. They are of a cold hardness. An aura of bitterness covers them.

Although built like a war machine and portrayed as droned robots, they are mortals. Beyond the mask is a living being, an actual person with a meaningful name. We can uncover those names by removing the comlinked helmets… yet the few of us left needs to start standing our ground.

The Empire has gained enough. Will the Jedi rise to ricochet back their laser bolts… or will we let the First Order build yet another Death Star? It is a simple matter.